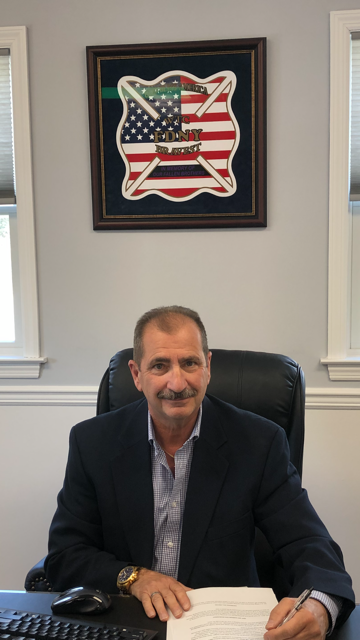 Robert (Bob) Scottaline has been a resident of Lake Grove for 42 years. While residing in the Village, he and his wife Karen raised their two daughters. He now is a grandfather with two granddaughters and two grandsons. One daughter along with her husband is now raising her family of three children in the Village.

During his third term as a Trustee of the Village and second term as the Deputy Mayor, Bob was appointed Mayor by the Village Board for the remainder of a two-year term. This was to fill the vacancy created when former Mayor Scott Middleton was elected to a four-year term as Village Justice. In March of 2007, Mayor Scottaline was elected by his constituents to stay on as Lake Grove’s fifth Mayor.

For his entire tenure as Village Trustee, Bob was the Commissioner of The Department of Public Works. As Commissioner of the DPW he restructured the department to be more efficient to deal with an ever-changing Village while keeping expenditures to a minimum.

As a Trustee he also served as Commissioner of Parks during the construction phase of Robert J. Henke Passive Park and worked closely with the architect and contractor to assure that the park would be a beautiful addition to the much-admired Lake Grove parks. In addition, he was very involved with the early planning and construction of the beautiful Lake Grove Village Green and Memorial Park.

Mayor Scottaline was employed with Lockheed Martin Corporation for thirty-four years where he worked on upgrades to navigational systems for the Trident submarine as a Senior Technical Specialist, along with teaching an Electrical Engineering course in the evenings. Bob then went on to become a supervisor with Suffolk County Water Authority in the Production Control Department acquiring a IIB Water Operators license.

His goal for the Village is to keep a small village environment with a strong sense of community while dealing with the ever-increasing demands due to the influx of new homes, an expanding business district, and traffic from surrounding communities.

Additionally, Mayor Scottaline is very much involved with the development and redevelopment of commercially zoned properties. He, along with the Village Board, see an opportunity to create aesthetically pleasing retail areas that are more in harmony architecturally and blend better into the community.

During this unprecedented time, the Mayor’s number one goal is to maintain a lifestyle as close to normal as possible while ensuring the safety of the public and the entire Village staff.